To explain what is De Peper, we have to look at our roots. 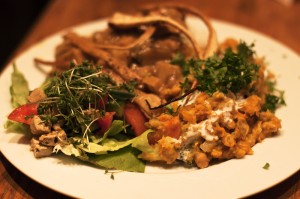 De Peper (usualy called ‘the pepper’ since a sort of English is the main lingo here) originates from the Silo squat Kroeg (1990). The Silo and its cafe-bar were famous for its creativity and ingenuity, but nonetheless the city chose to upgrade destroy this lively part of Amsterdam. After the Silo squat was evicted (1998), part of the community running the kitchen decided to keep the project going; 15 years later we are still cooking yummy vegan food and hosting events.

Since its origin, the project has always been a creative people’s kitchen run on a volunteer-basis by and for the activist/creative community and operating from squatted locations. People that have no kitchen of their own (such as in new squats), people that normally cannot afford to eat in restaurants (among which many artists, activists, and migrants), and people that have trouble meeting their dietary needs or desires elsewhere in the city (organic, vegan, halal/ kosher, sugar-free/ gluten-free ), could find refuge in De Peper and eat a politically correct super-healthy and tasty dish for just small pocket money. On top of that they would meet the more interesting people in town and get surprised with all kinds of planned and unplanned creative performances and socio-political stimulations. 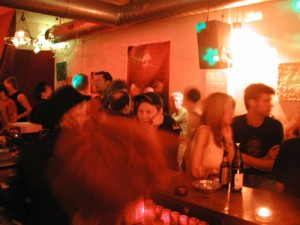 Today, De Peper operates as a member of the EHBK association, running the OT301 (called film academy in old squat lingo) collectively with other groups and individuals. We are now again part of a larger cultural space, just as in the Silo squat. This provides us a constant and lively stream of visitors, building members and traveling artists to interact with. This collaboration in EHBK also results in De Peper being ‘on the grid’. We are no longer forced to travel from squat to squat and from eviction to eviction, but we do have to pay rent and fit a tight legal framework (e.g. play by the rules) because we are being monitored by the city.

The Peper volunteer collective, whose members have varied over time, managed to keep the creative and political aspirations of its historic past alive as a priority despite of its constant changing legal, financial and geographical position.

Where to find us

You can find De Peper at the Overtoom 301 in Amsterdam at the OT301. Walk into the building and take your first door left. Here is some more details on how to find us.

Call us to reserve your place